Here is a TK test model that I painted back in 2013 for my Warhammer Fantasy army... Unfortunately this was the only model I was able to do befor GW discontinued the army... 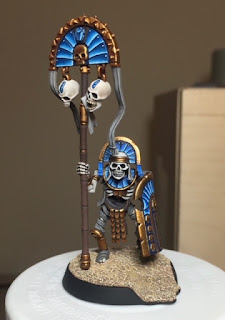 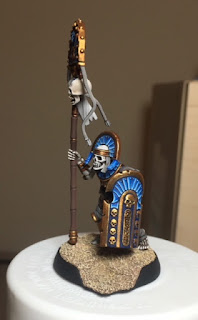 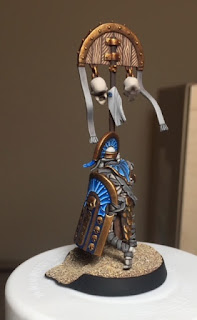 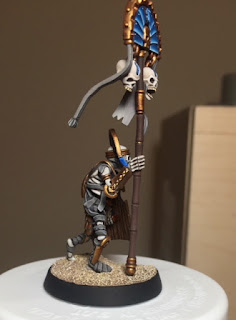 Greetings! It seems that only yesterday I was writing a long apology for not updating my blog for some time…Well, another year went by and I was not able to work on anything worth mentioning on this blog. My personal life keeps me too busy and at this moment doesn’t allow too much hobby time. The only significant hobby related activity that I had for the last year was teaching a couple of classes at Adepticon this year. It looks that things are turning around and I am hoping that soon I will be able to get back to my “meditation chamber” and put some paint on all the models that I have laying around.
In the meantime, I decided to show some of my old stuff. Couple of months back I received a request on Bolter and Chainsword via PM to show some of my Space Wolves that I painted back in 2010-11. The only pictures I had were the ones that GW made for their website, so I decided to take a couple more to show my wolves from different angles. I am really bad with the camera but I tried my best, so please keep this in mind. 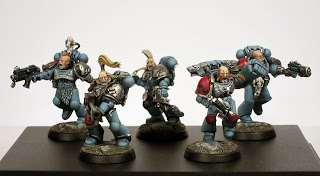 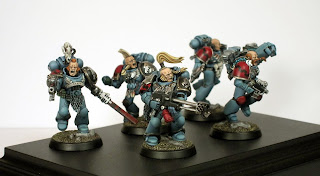 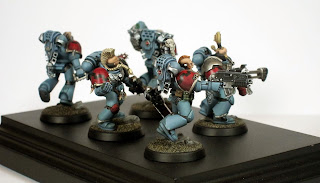 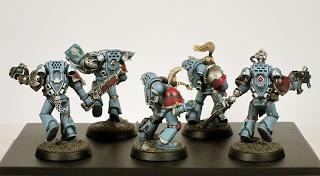 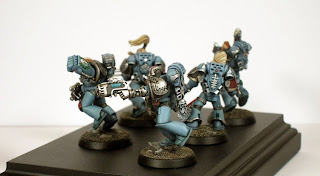 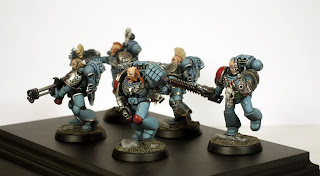 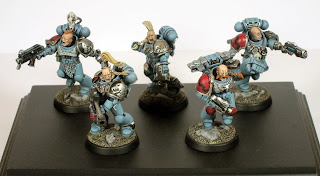 There are a couple of things I wanted to mention about my Wolves. It is sort of an ongoing project. At the end I am hoping to have a small high quality SW force that I can proudly display in my figure case. I originally decided that I want to paint some SW back in 2009 when the new SW was released. I really liked the new models and when I saw the banner of Iron Wolf company I knew I must paint some. There was very little information about that company aside from it being mostly mechanized. My original plan was to paint five Grey Hunters and have one of them carry the company banner. As I was running out of time my plan was slightly altered. I settled on the color scheme pretty quickly. I also wanted my SW to be more “marines” than “barbarians” so I was trying to go light on “wolfy” stuff. The company shoulder pad was originally supposed to be painted but after discussing my project with my friend Chris Borer I changed my mind and decided to try and sculpt the company symbol. Chris’s reasoning was quite solid. The company/chapter symbol will never change throughout marine service, so why not have it more ornate than the pack/tactical symbol. Also, it would be easier to keep it unified through the unit. It was my first try in sculpting (not counting hooves of my purge unit a year before) and it was quite a challenge. It took me almost as long to sculpt the shoulder pad as it took me to paint the entire unit. I was quite please with the end result however. The other two things that I wanted to mention about this unit are the pack markings and “excessive” bionics. I was trying to achieve a more “mechanical” feel to the markings reasoning that it would make perfect sense for an Iron Wolf company. Bionics were used pretty much for the same reason. Overall, I am looking at Iron Wolf company as a sort of “Iron Hands chapter in wolf clothing”. Below is the picture taken by GW and I just added the close up shots of shoulderpads for Grey Hunters, Wolf Guard and the Iron Wolf Company. 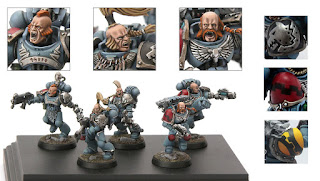 And here is my Wolf Guard model. It was converted from Games Day 2008 limited eddition model. 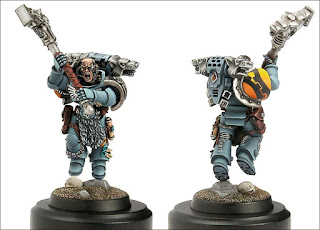 Not much of an update but here is my current progress on Eowyn model. It is pretty much done and ready for panting. The only thing that is left is to put some leaves on the branch. With this base I was going for Helms Deep type of terrain. 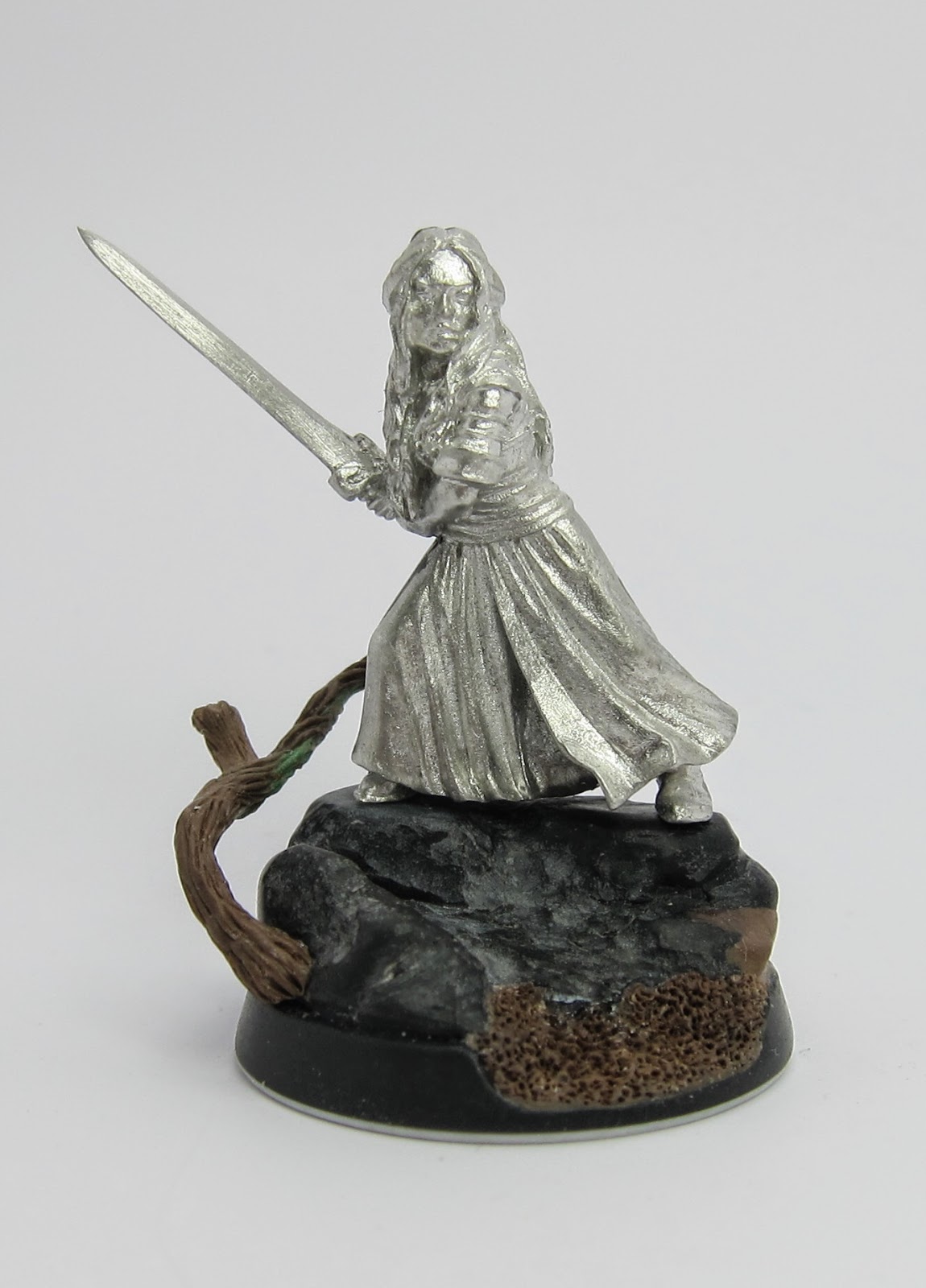 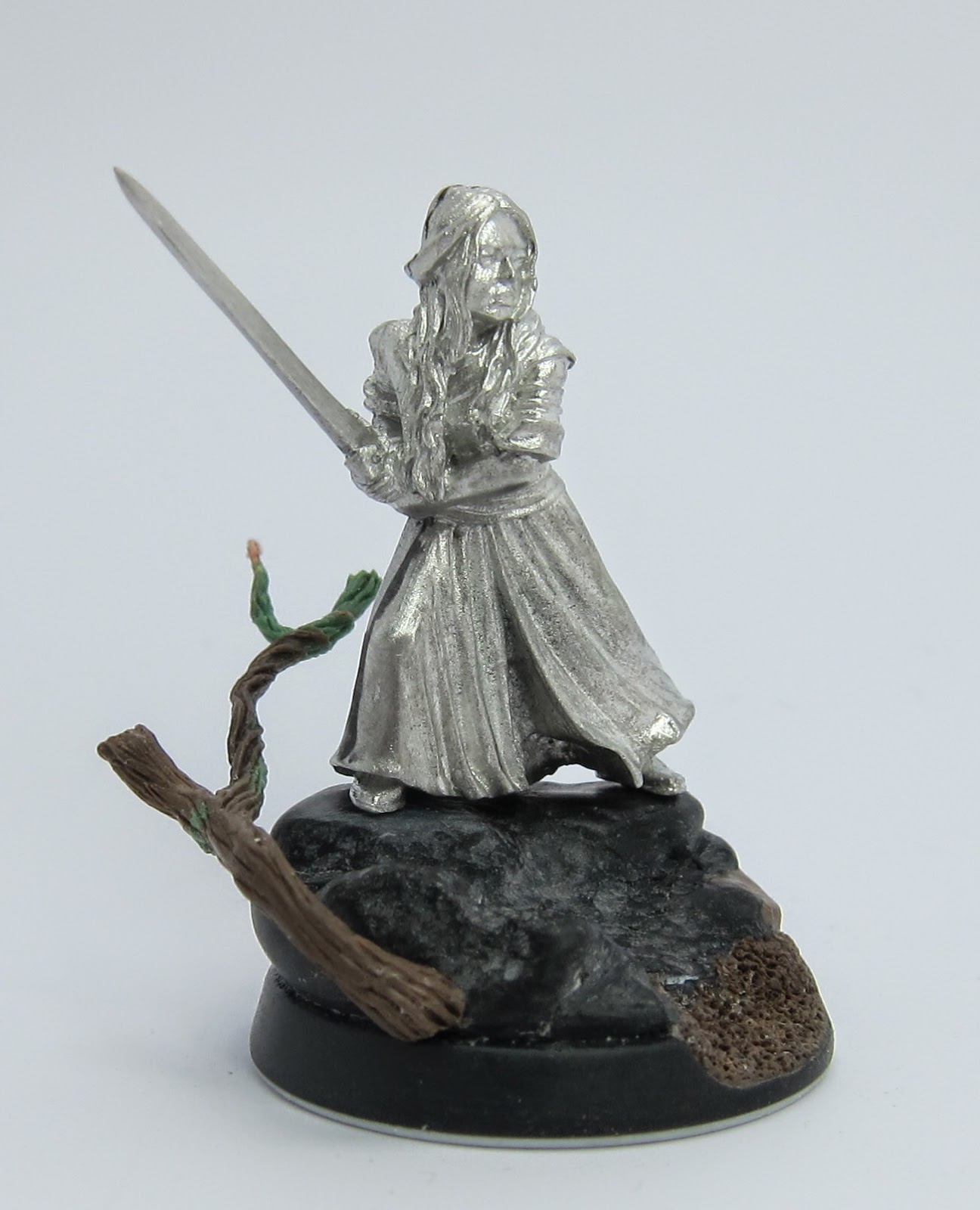 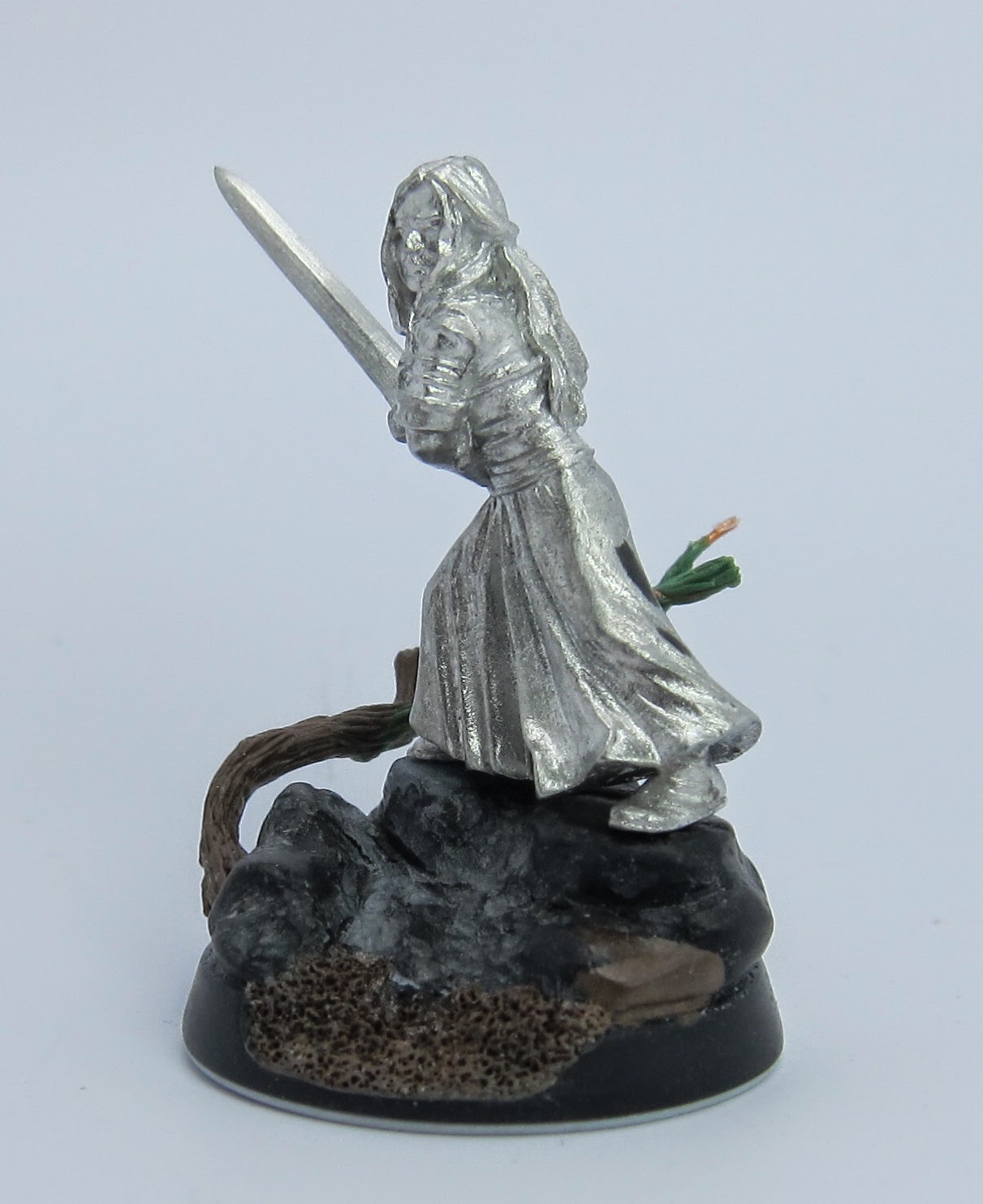 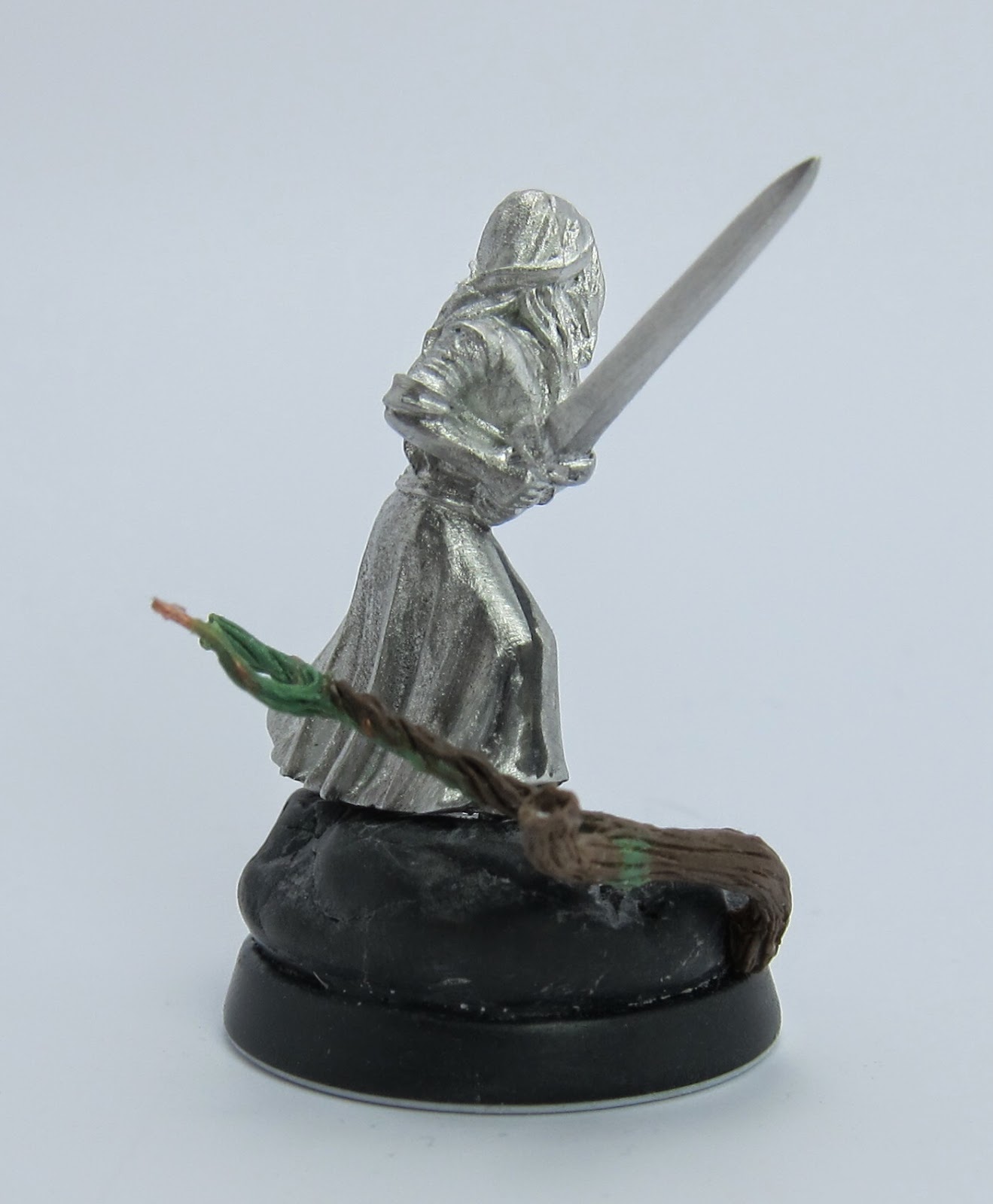 It has been some time…

Greetings! ...to those few who are following this blog and to those who occasionally stumble on it. It has been over a year since I posted any updates and, while I didn't intend to post on a weekly basis, a year of inactivity is a bit too much... I do apologize!

2013 was a really strange and somewhat pivotal year in my life. It brought me a lifelong joy and a lifelong sadness. It was definitely a year that changed me a lot. It was also a year that I missed US Golden Demon competition after attending it for five consecutive years. I really had a great game play for that year but with everything that happened in my personal life I had to put hobby life on hold.

Now, since my life is slowly getting back to normal, I decided to get back to the hobby. For the last two years I have been sculpting/converting a duel and at this point the project reached its completion and I plan to start painting it soon. Here is a little teaser of the duel. With more to come at a later time. 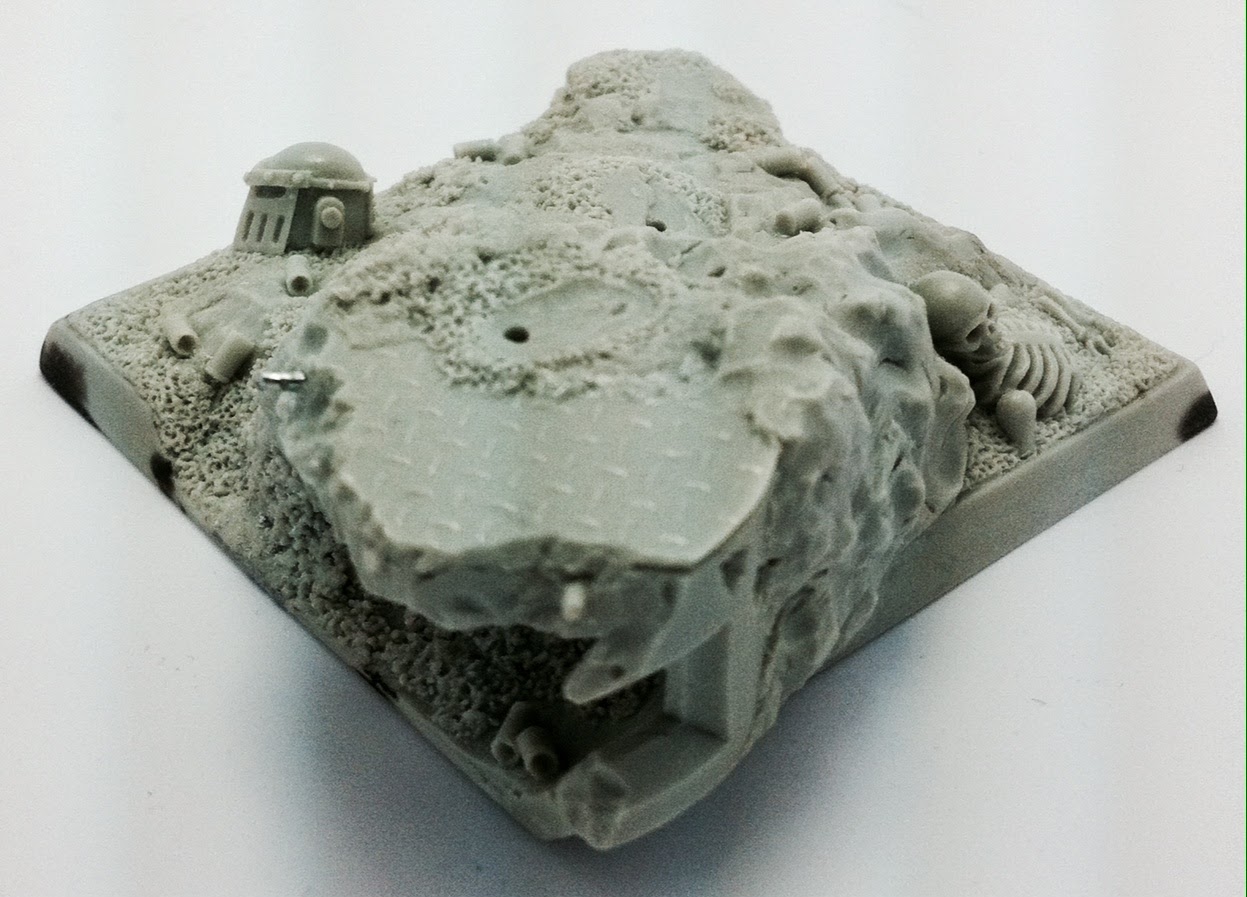 Now, the issue with the duel is that I haven't touched the painting brush since early summer of 2012 and I really have high expectations for this project when it is completed. So, I decided that I need a "warm up" project (maybe two) before I approach the duel. The choice of my first "warm up" model was relatively easy. I wanted to paint something new stylistically and I didn't want to put too much time into conversion, so my choice fell on one of the few good models from LotR range. This model was given to me by my good friend Todd Swanson and I intended to do it justice. 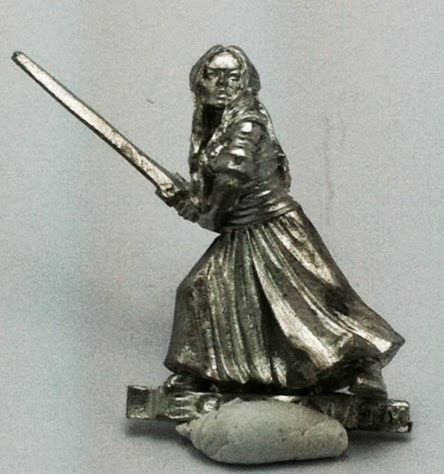 In order to keep myself motivated and have more updates on this blog I decided to document my progress here. So, expect to see at least monthly updates and maybe I will have a little extra time for some other projects as well.
at 4/08/2014 01:52:00 PM 2 comments:

I haven’t updated this blog in quite some time, so I decided to post something special this time around. This was my entry for US GD 2012.

The story of this entry started two years ago when I saw FW books about Badab war. I wanted to make a squad of marines in Mk III armor. I purchased forge world models and got quite disappointed with the quality of the cast. I quickly became frustrated with the amount of time it was taking me to fix FW models. I started to think that it would have been easer to sculpt my own models... and I started to do just that. I didn't have much experience with sculpting before (just small green stuff work on some of my models) so it took me quite some time to get a grasp on the process. Chris Borer helped me tremendously to improve my sculpting skills. After year and a half I finally finished my Mk III torso and legs. I also realized that I have only two and a half months left before GD and it is just not enough time to finish five models. So I started to think about 40k single category. Finally I settled on Blood Angels but I didn't want to do pure BA marine, so I decided it will be a BA successor - Blood Drinker.

It took me some time to research the chapter's background and figure out the color scheme. Blood Drinkers are unique among BA successors. They do not use typical BA markings but follow the codex pattern. I still wanted to keep some BA references in my color scheme so I decided that my Blood Drinker sergeant will be from the seventh (assault) squad of the second company. This allowed me to have yellow trim on shouldered (company color and/or chapter color). I also decided that yellow will substitute white, so the tactical markings are done in this color as well as the veteran sergeant helmet (also may represent that he is from assault unit - BA style). The decision of weapons was quite easy - they had to be BA specific. While power sword is not unique among space marines inferno pistol is. The last thing to decide was the name of my sergeant... I am a HUGE fan of Chris Borer's work and I like his story behind the names of "Fratricide" duel. I decided that my marine should be dedicated to one of my friends... But who, that was the question. One trait of Blood Angels and their successors that is always forgotten is their artistic taste... In this respect I always thought about them as a sort of "loyal Emperor's Children." Among my friends I have quite a few artists but one in particular stands apart - Todd Swanson. All I had to do is make the name sound Italian - thus brother sergeant Signo was created!

The atmosphere of the model is supposed to show the events taking place during Reign of Blood 802.41k., when Blood Drinkers helped to fight daemon infestation on hive world of Helios Alpha.

I want to thank Chris Borer for all his help and guidance on this project. Also, special thanks to David Pauwels and Todd Swanson for constructive criticism.